I changed astronomy forever and he won Nobel Prize for that.

The first pulsar was thus named CP1919 and later became PSR B1919+21. Why these weird names? Well these numbers are the right-ascension and declination (equitorial coordinates) of a pulsar in the sky.

Cambridge 1967 The year of 1967 brought a revolution in astronomy with the discovery of pulsating sources of radio of short time periods. The story began with radio astronomer Antony Hewish and his colleagues at Cambridge University investigating the twinkling (on/off) of the radio signals on passing through sun's winds with their scintillation array. Their aim was to understand the material of solar winds though these twinkling signals. At the time Hewish and his PhD student, Jocelyn Bell, were building a long-wavelength antenna to study the scintillations which are a mark of quasars. When regular observations began with the antenna, Jocelyn recorded large fluctuations which looked nothing like scintillation effects; it was more like Extra-Terrestrial interference. These were recorded in the middle of the night; the next day Jocelyn reported the findings to Hewish, who dismissed the findings saying "it could be passing motor cars". For several nights the signal vanished and then re-appeared spasmodically. Later, it became clear that the singal is not some motor car but indeed some extra-terrestrial signal.

The immediate question was, "what sort of object could produce this signal?" Many speculations were put-forth with one being of extra-terrestrial civilisation. This possibility was felt disturbing becuase if common people knew that signals received that might have come from intelligent extraterrestrial source or little green men, good science would turn into a dream.

The detected signal was a periodic signal with time period of 1.3372795s second. Since the signal was coming from a point like object following sidereal time, this newly observed radio star was named PULSAR (Pulsating Star). It designates repeating pulses of radio emission rather than a pulsating star. Although initially it was jokingly called "LGM-1“ by Bell's team, as an extra-terrestrial signal from intelligent beings but was later discarded on observations of other parts of sky.

Over 1600 pulsars have been found since the first one. Nowadays the observation procedures are quite developed, if the pulsar is known, a radio telescope is pointed to record observations for fixed time duration. India has two major radio telescope facilities, GMRT and ORT . The data is processed in order to do any scientific study with it. Now in order to discover new pulsars, a very complex algorithm is to be followed, Radio Telescopes do a survey of sky and characterize some specific kinds of peaks in data as sign of pulsars. Sources for further reading can be found here. 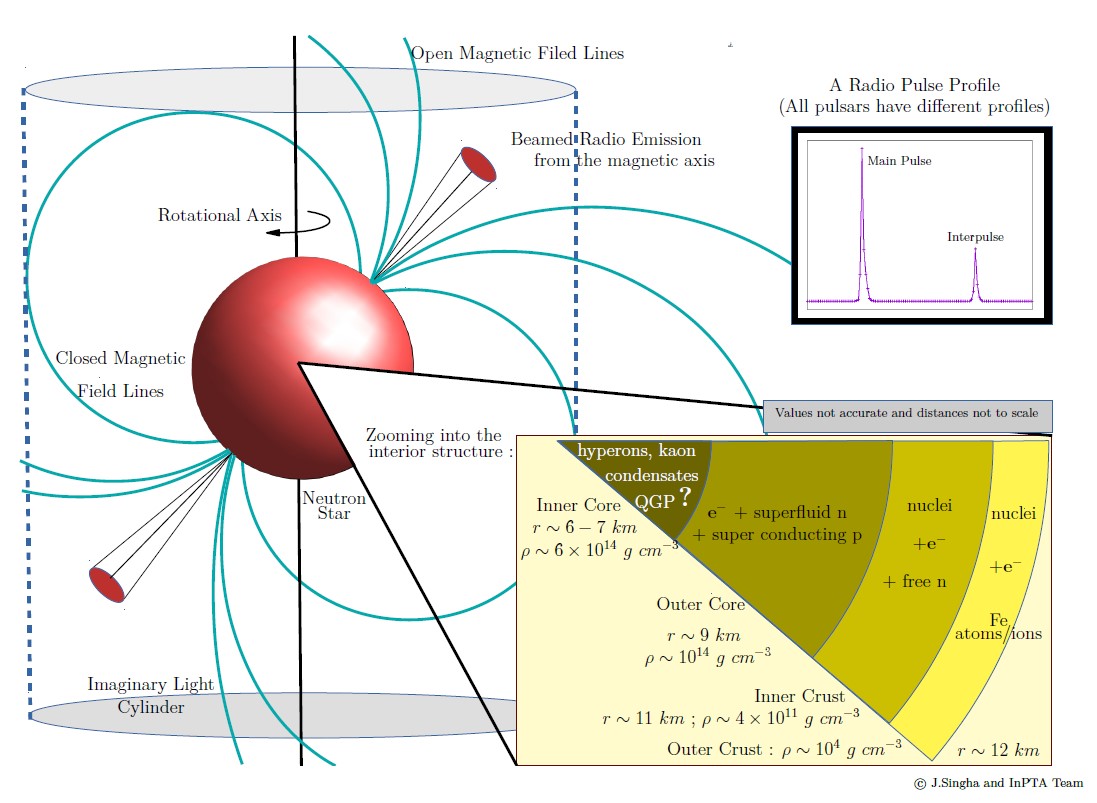